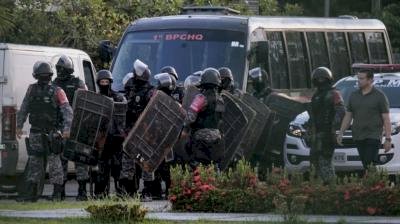 A clash between two prison gangs on Monday left at least 57 inmates dead with 16 of them decapitated, authorities in the state of Para said, the latest deadly clash as Brazil's government struggles to control the country's overcrowded jails.

State authorities said the riot began around 7 a.m. local time (1000 GMT) at a prison in the northern city of Altamira, and involved rival gangs.

Prisoners belonging to the Comando Classe A gang set fire to a cell containing inmates from the rival Comando Vermelho, or Red Command, gang, Para's state government said in a statement.

Most of the dead died in the fire, they said, while two guards were taken hostage, but later released.

"It was a targeted act," state prison director Jarbas Vasconcelos said in the statement, adding there was no prior intelligence that suggested an attack would take place.