Ignore fake messages: WhatsApp is not shutting down and you don’t have to pay either 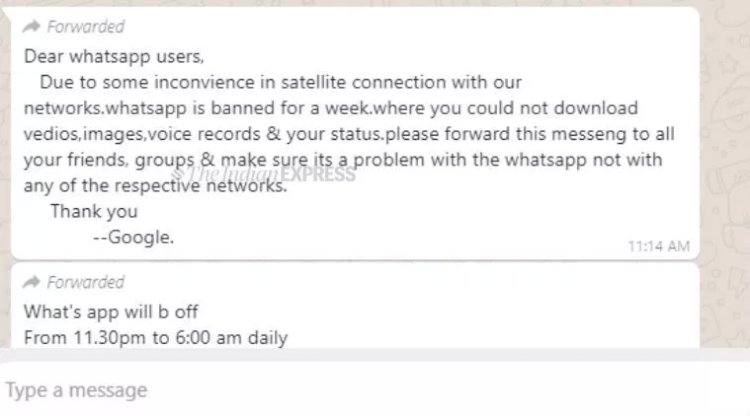 Facebook, WhatsApp, and Instagram faced a global outage recently with users complaining that they were unable to upload, send images on the platforms. Facebook later said that the issues were due to maintenance operation and were fixed, but thanks to the outage, many users started receiving fake messages saying that WhatsApp has been banned or that they will be charged for using the app in future.

To make the messages legit, some even came with ‘Thank you — Google’ sign-off. Given WhatsApp is owned by Facebook one wonders why Google would be sending messages about its fate. The messages are clearly fake and WhatsApp has not been banned or will be shut down 11:30 pm to 6 am daily, as some messages are claiming.

Users should just ignore these messages and if their friends and family are forwarding them, it is perhaps best to inform them that these messages are fake and just spreading misinformation. One such fake message claimed that WhatsApp will be shut down from 11:30 pm to 6 am every day and this was directed by the central government and added that it had a message from Prime Minister Narendra Modi.

It urged people to forward the message or else their WhatsApp account will be deactivated and they will be charged a certain amount to activate. Similar messages have been forwarded in the past when it comes to WhatsApp.

The latest message, which claims to be from the central government goes on to mention the “issue involving the pictures updates not showing”. It claims that WhatsApp will remain free only for those who are “avid users” for which they will need to forward the message.

To reiterate, Facebook-owned WhatsApp has not officially said anything about the service being charged or banned. Neither the central government nor Google have been circulating messages that indicate this. This is not the first time that an outage has become an opportunity for some to circulate fake messages with misinformation.

Coming to the outage itself, Facebook has said, was due to a bug, which was accidentally triggered during a routine maintenance operation. The servers were back on 100 per cent later in the night. The issue impacted users in India as well as in the US and Europe. On WhatsApp, many users complained they were not able to send or download images sent to them by contacts.