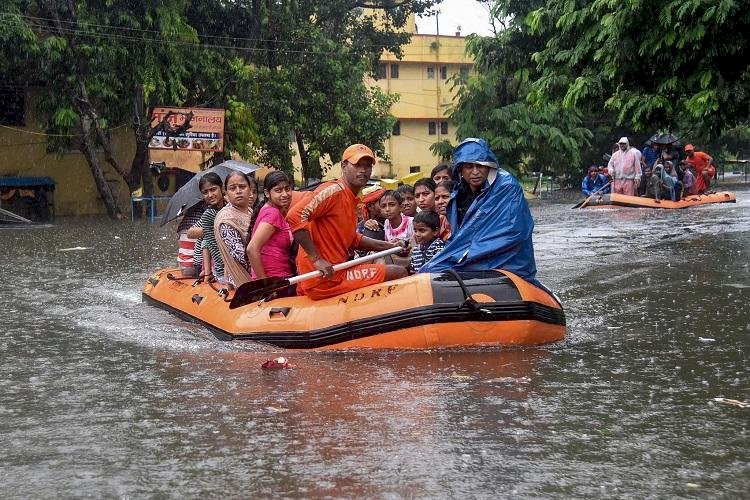 Heavy rains for four days, resulting in floods, has brought life to a standstill in Bihar, with the State Disaster Management Authority putting the death toll at 29 as of Monday morning. Severe water logging stranded even the Bihar Deputy Chief Minister Sushil Modi, who was rescued by disaster rescue personnel. Water had reportedly entered his house.

The rains briefly let up on Monday, but more rain has been predicted.

The water level in major rivers including Ganga, Koshi, Gandak, Bagmati, and the Mahananda, are on the rise, threatening to breach embankments at many places.

The Water Resources department has alerted the officials concerned and asked the district authorities to take measures to deal with any possibility.

According to weather department officials, Patna has received 151 mm rain between on Saturday and Sunday -- a record in recent years.

On Sunday, Kerala Chief Minister Pinarayi Vijayan tweeted that the state was ready to assist the flood-affected state. “On the recommendation of CM, Kerala's Special representative in New Delhi contacted the Bihar Government and the Patna district administration,” Pinarayi tweeted.

According to reports, many state-run hospitals, including one of Patna’s largest hospitals Nalanda Medical College and Hospital, are flooded.

"This is the first time I have seen boats plying on the water-logged roads in Patna... it is new for us," Sanket Jha, a college student of Rajendra Nagar colony, said.

Chinmayanand Discharged from Hospital, Shifted to Shahjahanpur Jail After Court...